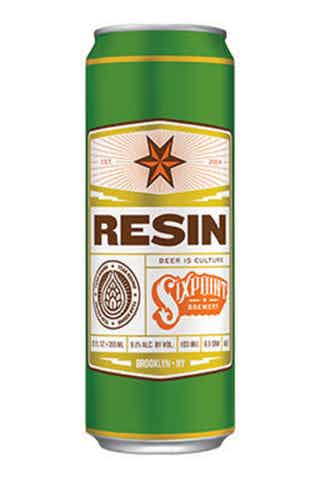 Sixpoint Resin is one of the hoppiest beers available, relying on the resin in hop cones for its eponymous name. Self-admittedly, even brewmasters almost spit it out upon their first taste, due to the bitter sting of the hop resin. Bitterness is nature's way of indicating poison, so such a taste can inspire fear. But you shouldn't fear the hop cone. Instead, embrace it! Eventually, the "lupulin shift" occurs and you begin to crave what you once feared. A product of the Sixpoint Brewing Company from Brooklyn, New York, Sixpoint Resin is about celebrating everything that makes hops a quintessential part of a beer. Think of it as hop candy. You aren't quite sure when or why you started to love it, but it's a coming-to-God experience that either opens your eyes to the light or brings you to the dark side. Piney, hoppy and resinous, Sixpoint Resin clocks in at 103 IBUs, so if you aren't ready, bitter beer face may become a reality. If you know what you're getting yourself into, it's actually a slap in the face that feels oh so good. It uses dozens of different hops, so there's no one flavor that dominates. There's no foul in sipping it right out of the can or letting it breathe a bit in a pint glass. Just get ready for it to throw a taste uppercut that might knock you down.